And help to open the way for more people to participate.

Can a Gaze change the Crime Rate?

Those of us who have experienced the transformative effect of Braco’s Gaze in our personal lives may not be astonished by this headline-breaking news! But then again, it’s pretty incredible.

Take this step by step!

On November 26, Claudia Vitulich distributed a news release through the press wires summarizing Braco’s historic appearance at a United Nations community event and including a photo of him gazing at the event. The news was distributed to thousands of news sources throughout the country.

Later that day, PR Newswire broadcast the photo with the title "Braco Shares His Special Gift for World Peace with the United Nations" on their Jumbotron video screen situated 25 stories over Times Square. The photo and title ran only three times that day,15-20 seconds a pop. 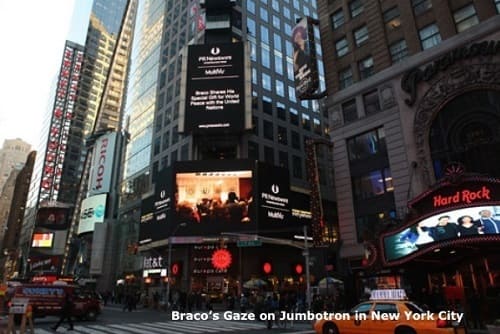 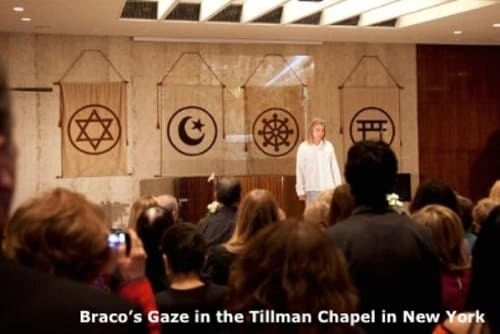 Two days later, Reuters, the leading newswire, reported that on that very same day—November 26—New York City had passed a 24-hour period without a single report of a person being shot, stabbed, or subjected to other violent crime.

Commenting for the city, the New York Police Department chief spokesman Paul Browne boasted that it was “the first time in memory” that the city’s police force had experienced a peaceful day.

And this, according to the NYPD, in a year when the city’s general crime rate had already risen 3 percent.

Clearly, only a few thousand people may have casually looked up to see Braco’s huge face on the screen—one that has broadcast the Time magazine Person of the Year as well as other world luminaries and celebrities.

But we ask you, could the mere showing of a photo of Braco gazing—blown up to huge proportions—have actually harmonized an entire city of millions? Eight million, to be precise.

In the city that never sleeps, was this…mere coincidence? An unsolved mystery? Or one miraculous moment? You decide. 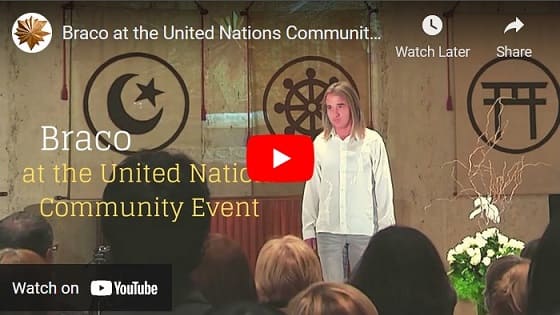 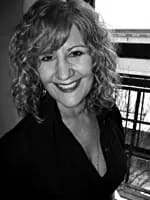 Pamela Bloom is the author of The Power of Compassion: Stories that Open the Heart, Heal the Soul and Change the World and Heaven Speaks: Intimate Interviews with Illuminated Souls, with Carla Flack